Away from off-field matters, I've started to look at a number of stats around our time in the Premier League so far, the first one being performance by manager: 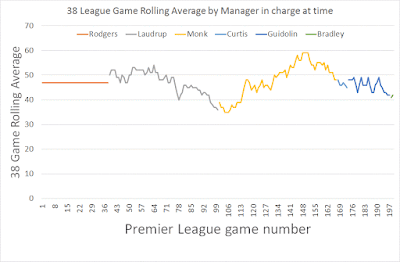 When looking at a rolling 38 game period (i.e., the equivalent of a league season), there have been some ups and downs. Laudrup's league activity started well but started to dip shortly before the League Cup final and at the time of his sacking Swansea had taken 36 points from their previous 38 games which is arguably the kind of tally that would get you relegated if in a single season.

The high point came towards the end of Monk's full season in charge (2014-15) when the figure was 59 points from a 38 game period.

At the time of Monk's sacking Swansea had 48 points from the previous 38 games which is pretty much the average for Swansea's time in the PL as a whole.

Guidolin was in charge for 24 games (although was ill for part of that time and question how much influence he would have had for what was technically his 1st game vs. Watford), but during his tenure, Swansea's 38 game average never went higher than 49 or lower than 42.

When split by manager, the thing that stands out is that Rodgers had 47 points from his season in the Premier League with the Swans and that's pretty the same rate for the 161 games (46.3 points per 38 games). For the last 5 seasons at least, Swansea have been an upper mid-table team with a variance of a few points either way. 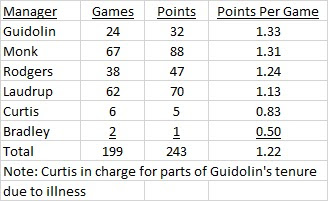 Whether an underwhelming couple of transfer windows have changed all that we'll find out in the next few months or possibly sooner if things don't start to improve.

For anyone interested, an interactive version of the 38 game rolling average by manager is below (and also available here if any problems or you want to view full screen).