Last February I presented at the Opta Forum on efficacy of crossing/shooting from Free Kicks, I've been planning to do an update at some point but Gylfi Sigurdsson's free kick vs. Villa was a good reminder to pull my finger out and get on with it.

When they go in like that one they make the defensive side look helpless and a goal 'unstoppable' - Guzan's positioning makes him irrelevant if the ball goes successfully over the wall. As great a free kick as it is, it's nowhere near the top corner when it goes in as it doesn't need to be that accurate to be a goal.

Guzan arguably still had in the back of his mind Sigurdsson's free kick against him last season when he went the other way:

A few weeks ago the boot was on the other foot as Christian Eriksen scored twice from free kicks v Swansea, both of which he put to Fabianski's side:

The question is, as a keeper, do you 'trust' your wall and leave it to whether the free kick taker get the ball over the wall, or do you try and second guess the taker and risk leaving a massive gap for them.

When facing elite players, I argued in my Opta Forum presentation that maybe a different strategy was needed and highlighted this example from a Nice B game:

Sigurdsson and Eriksen are arguably two of the best free kick takers in the league but sample sizes are generally too small to get a true conversion rate for an individual, but we do have enough data to start to make some assumptions is general.

I don't have the same quality of data as provided by Opta for my forum presentation (so any errors will be mine rather than Opta data issues) but I have put together an analysis of the outcomes of over 9,000 direct shots from free kicks taken in the big 5 Euro leagues (last 5 full seasons for Premier League, last 3 full seasons for La Liga/Serie A/Bundesliga/Ligue 1).

At the top level, overall 5.8% of direct free kick shots end up in a goal but of course that varies by location: 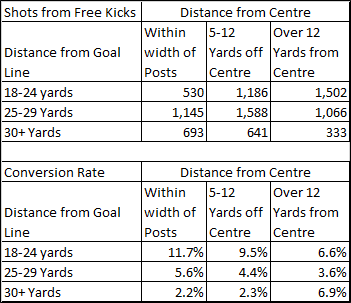 As you'd expect, the closer and more central a free kick, the higher the conversion rate, when looking at distance from goal (in a straight line and ignoring any angle to goal), conversion drops sharply from 25 yards out: 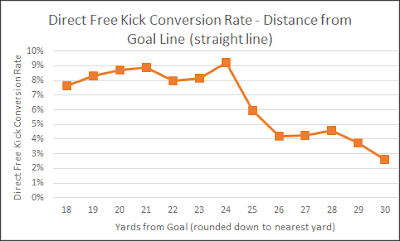 The other point to make is the relatively high conversion (6.9%) for long distance wide of goal attempts, my guess is that a lot of these are from free kicks that are 'put in the mixer' and end up going straight in.  It's open play rather than a free kick, but this goal from Andros Townsend is a good example of an effort that probably wouldn't have been classed as a shot until it ended up going in.
Going back to the Nice B example, if you know on average someone will score from a certain position 10% of the time, then if their unusual defensive set up resulted in a lower conversion then obviously that'd be a better strategy.  The risk however is that even if you tested it in training over a large sample and were confident conversion dropped to 5%, if you did it in a Premier League match and it didn't work, you'd risk looking a fool (where you never look stupid if you do what everybody else does, regardless of if it's the best option or not).

One of the other areas I covered in the Opta Forum presentation was how different teams approached free kicks in attacking areas, some shot pretty much whenever possible and some only shot in the prime positions.

Looking at the highest/lowest free kick shot volumes, tho two Madrid teams come out at opposite ends of the spectrum, I would expect Real to have more possession than Atletico in general but there's no doubt that Atletico are passing up the lower chance shots in favour of crossing rather than shooting.
Atletico's strategy was noticeable in the 2013/14 analysis I used for the Opta presentation, but last season they took things even further with just 6 direct shots, all from fairly good areas: 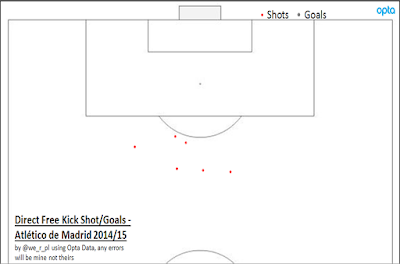 Looking at the teams with the highest shot volumes, there were a lot of Serie A teams in the top 20, which is also seen when comparing the leagues as a whole:
Bringing it all back to Gylfi again, Swansea host Arsenal again on Saturday and in the same fixture last season he managed this, which from 29 yards you'd expect an average player to convert around 4% of the time:

How much above average the likes of Sigurdsson and Eriksen are when it comes to free kicks is hard to quantify but feels like they take the art of free kick taking to a different level and that in some cases having a standard wall helps rather than hinders them.

There's plenty of free kick compilations out there but as a Swans fan enjoyed this goal compilation of the U18s Kyle Copp who has some great ones already on his showreel: