Following on from my previous piece looking at distance+sprint stats at the World Cup, this one takes a look at Shot Location.

All Shot Charts below exclude the 5 own goals and 12 penalties (exc. shoot-outs) that were scored in the tournament.

The overall shot chart is pretty busy, but you can see the lack of goals from outside the box: 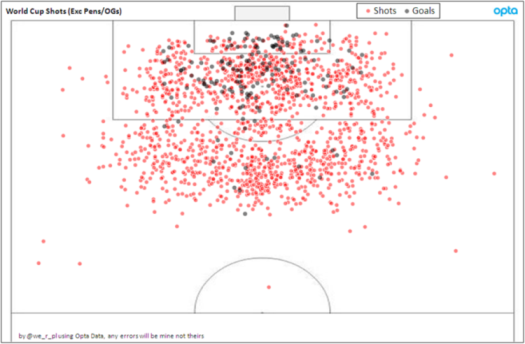 Looking at just the goals, makes things a bit clearer: 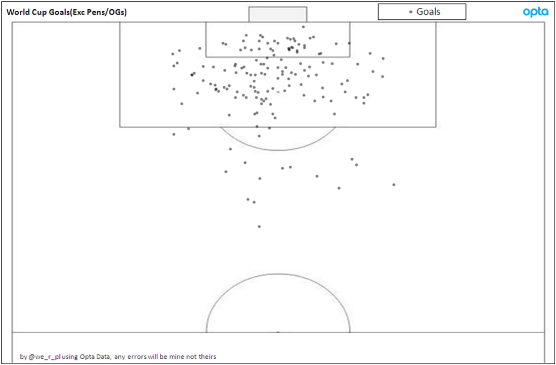 Goals from outside the box were fairly rare and the number of absolute screamers was limited.

For direct shots from Free Kicks, only 3 of 118 were converted: 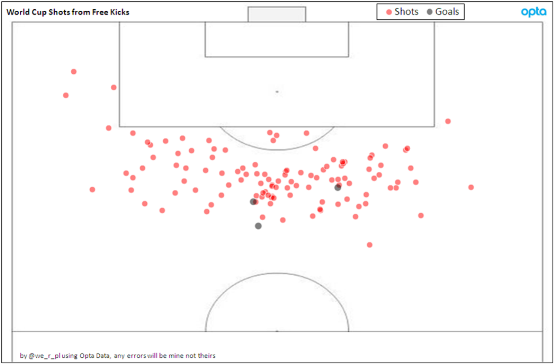 These were the long range effort from Switzerland v France:

I had planned (but never got round to) putting a piece together on David Luiz's free kicks at Chelsea and how they were an example of hope over experience, but his one against Colombia in the quarter finals was impressive.  Over a large number of events, shooting from that kind of distance might not be the optimal strategy, but if it comes off in the Quarter Finals of the World Cup you can't really knock it.

In terms of headers, 31 of 272 were successful with Van Persie's being the furthest out by some distance. 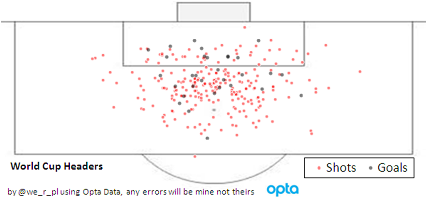 Grouped together by location the figures are:

When using the shot segmentation methodology I put together based on last season's Premier League, gives the following figures (more details here):

Looking at the two finalists, there's a marked difference in location (as well as volume) of goals.  Even if you took the Brazil game out the overall pattern would be pretty much the same for Germany, although for all the talk of a 'Golden Generation' for Germany and talk of Messi being tired, the difference between the two sides was minimal with Argentina arguably having the better chances even if they weren't as impressive as Germany on the way to the final.
I'd argue that the Opta stats are a little bit out for Messi's goal (furthest right in the chart above) v Iran but it was still a great finish although closer than the chart suggests (I'm not knocking Opta, the accuracy is pretty good and also I'm cobbling this all from various sites without paying so can't exactly complain!):

The next stage is to repeat the work done on last season's Premier League with more data (other seasons) and other leagues, to get a better understanding of shot outcomes.  For the Swans fans who've got this far, Swans shot stats aplenty will be coming soon(ish).