As Gylfi Sigurdsson stroked in what turned out to be the winner, the commentator called it a 'Smash and Grab' which was an enormous exaggeration.  Yes, Man Utd might have outshot the Swans by 14-5 but in terms of decent chances there were only 3 and all of them ended up as goals.
MOTD tweeted that the 29 passes in Ki's goal were more than any last season (beating the 24 for Bony's goal v Arsenal): 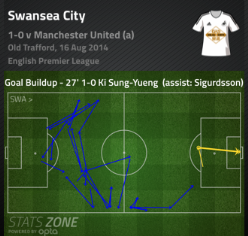 I mentioned in the preview yesterday, that this was a great time to be playing Man Utd due to a mixture of injuries, Van Persie not yet being available due to his World Cup exploits and the fact that (even more so now), there will likely be a number of new signings coming in before September.

Man Utd had most of the ball but did relatively little with it, much was made of their over emphasis on crossing last season under Moyes but this seemed to be more of the same:
Crossing from this kind of distance from goal would normally be classed as 'Putting it in the Mixer' and generally speaking it was dealt with easily, predominantly by Ash who made 15 clearances, 9 more than the next player (Amat).
For me the central part of the first team when everyone is fit would be Leon/Ki/Sigurdsson and although Jonjo sailed close to the wind at times he put in a good performance as Man Utd created very little through the middle.

Van Gaal's change to a 4-4-2 in the second half and in particular Januzaj's attacking of Taylor brought some initial results (and led to the corner from which they scored).  I think too much could be made of Taylor's substitution, yes he got skinned a couple of times but once your on a yellow in that situation, it's a prudent step to be replaced (even if it is by the man most people's whipping boy - Dwight Tiendalli).

It was a bit of a surprise to see this tactic greatly reduced after Swansea got their second but is probably the kind of area you'd need to re-watch the game a couple of times as it could well be due to the extra protection Dwight received (from Shelvey?).  Also looking at Januzaj's passes received he's a lot more involved down Swansea's right after Herrera comes off.
Looking at Fabianski's activity, he didn't have to do anything spectacular, but what he did have to do, he did well.  In terms of distrubution, after passes to Amat (6) his next highest was to Bony.  The margin of error on this kind of thing is pretty small, a good pass and it's on Bony's chest and nobody's is getting it off him, a bit too high and then it's 50:50 at best.
As Garry Monk mentioned at the Fans Forum, the Villarreal game was more about minutes on the pitch than formation (I'd be surprised in Gylfi plays on the wing that often) and it was a case of going back to a more familiar formation.

The big difference for me this season is the strength of the squad with a variety of options depending on opposition/score e.g.,


As well as other players such as Emnes, as long as we are not too unlucky with injuries we'll have the option to make substitutions that are like-for-like in terms of quality which hasn't been the case in previous seasons which is a credit to the club as it shows how they've used TV and transfer money to build season upon season.

Update: I'm looking at different ways of presenting match stats and the one below shows pass volumes based on an average of the last 5 minutes, this helps to show (roughly) the level of control a team has at any given time.  As has been seen with the rise in counter attacking football over the last couple of years, not having the ball isn't always a bad thing but bearing that in mind it does show who has control at any given time.
Other Posts: Premier league Shot Location, World Cup Shot Location , World Cup Distance + Sprint Stats
Twitter: @we_r_pl http://www.twitter.com/we_r_pl
Match Stats: Created using Statszone , Whoscored  and Squawka
Posted by Dan B at 07:42