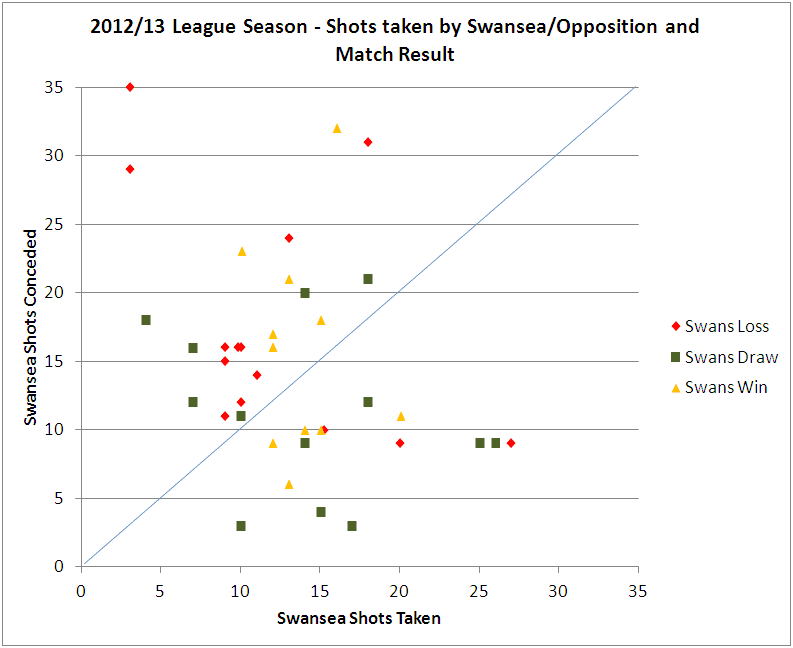 I've recently finished 'Luck' by Ed Smith.  Ed is a former England cricketer who was interested in investigating the role of chance and sportsmen's perception of it.  He looks at how (both on and off the field) chance events can help define a career.

Without getting too 'Sliding Doors' about it, there's plenty to suggest even though the Gary Player mantra of 'The more I practice, the luckier I get' may be true overall, for any individual event luck (or random variation) can play a major role in how things turn out.

What's this got to do with the Swans? Well the reason I've mentioned Rob Green is that after 8 minutes in the first league game of the season he let in what was a fairly average shot from Michu and the rest is history.

I'm not saying that if Rob Green had saved Michu's shot that roles would have been reversed and QPR finish top 10 and Swansea get relegated.  QPR were pretty terrible all season but the match wasn't as one-sided as a 0-5 scoreline suggests.

That first game against QPR was one of those where pretty much everything went right for Swansea, in terms of shots QPR had the majority and as can be seen by the first and second half chalkboards, it was only 0-1 at half time but Swansea managed to convert 4 of 7 attempts in the second half.

The way Michu took his second was of someone supremely confident in his own ability, how much of that is self-confidence (he was in top 10 highest scorers in La Liga the season before) and how much it was boosted by the earlier goal we'll never know, but within a week he's got 3 goals and Swansea have 6 points and (briefly) top of the league.

At the other end of the season was the match at home to Fulham which despite a multitude of chances for Swansea, ends up as 3-0 to Fulham:
Over the course of the season there will be plenty of 'what-ifs' and it's easy to look back with the benefit of hindsight and say that Michu's first goal was a defining moment.  In any game you could say 'if only' that shot had gone in or been saved but the question is 'Is a season long enough for 'Luck' to balance itself out?'

Looking at the league season as a whole, in 23 of 38 games the opposition had more attempts on goal than Swansea.  The relative attempt counts range from Swansea 27 to Fulham's 9 all the way to Liverpool having 35 to Swansea's 3 in the hammering the week before the Capital One cup final.
Not all shots are equal of course, a penalty (not that we got one in the league) has a greater likelihood of being scored than a 40 yard punt.  The next step is to break these attempts down in more detail to work out which games were 'deserved' wins or 'unlucky' defeats.

Match Stats and Chalkboards: Created using Statszone and EPL Index
Posted by Dan B at 04:35

To help fill in the gap between now and the start of next season, I've started to put together some stats for all of Swansea's league games last season.  The plan is to hopefully get a better idea of what went well and what can maybe be improved upon.

The first area I'm looking at is the relative points per game each player got for every game they started.  The reason I've looked at this first is that despite all the criticism he got ('I was there when Shechter scored') etc., I had a feeling that Itay Shechter would actually have a decent return.
Points above average is the points they gained compared to the team average of 1.21 per game, this is to give a bit of a guide to how much better (or worse) than average results were when that player started.

Extrapolating averages is always asking for trouble and here you could argue if the trend of 14 points from 7 starts continued over a season, then Swansea would have finished 3rd in the league and in a Champions League place had Shechter started every game!  This ignores the fact that in a number of his starts the team didn't go ahead until after he was substituted.

However while Shechter was certainly no world beater, arguably the greatest thing he brought to the club was to act as a lightening rod for most of the negative feelings about the team probably saving Pablo and Ki a lot of (usually unjustified) criticism.

Anyone looking at this and seeing Shechter top and Ben Davies towards the bottom will probably say that the figures are complete cobblers and to some extent they'll have a point.  I don't think anyone would say Davies has not been a major part of Swansea's success last season.

The main reason Davies' figures are comparatively bad is that he didn't start the first 3 games which Swansea got 7 points from (QPR/West Ham/Sunderland).

This highlights that as well as the 'on the beach' accusations from mid-Feb onwards you could argue that taking those 3 games out, form was of lower mid-table standard for most of the season.  Over the last 35 games of the season Swansea picked up 39 points compared to Aston Villa's 40.

I don't know if it's possible to be on the beach from September onwards but the confidence gained from that early buffer certainly helps reduce pressure and increase self belief and also relates to the idea of luck (good and bad) that I'm planning to look at in my next post.

The qualification process for the Group Stages of the Europa League is a long and pretty complicated one, but thanks to the Europa League section on Wikipedia and a great article on seedings by Bert Kassies, I've put together what it's likely to mean for the Swans.

It'll no doubt annoy those moaners who say a Welsh club shouldn't be in an English league, but thanks to the fact that Swansea are technically a representative from England this means that Swansea benefit from the English sides high country coefficient (rankings based on past performances from teams from that association which when added to that teams own coefficient for recent activity in Europe gives the overall ranking.

This means that Swansea will be seeded for their Third Round qualifying game on 1st/8th August.  Who they will face will in part rely on who gets through previous qualifying rounds but there are a few big names that we definitely won't face in this round such as Stuttgart, Sevilla, Udinese (also can't play Spurs/Wigan before last 16 as from same association).

There a still a couple of places to be finalised but there a few big names (in historical terms at very least) in the list of possible opponents such as Red Star Belgrade, CSKA Sofia and Malmo with somewhere in Eastern Europe looking a good bet for Swansea's likely destination.

If there weren't enough unknowns in the 3rd qualifying round draw, the Playoff round is even more convoluted as it also involves teams that lose in the 3rd qualfying round in the Champions League.  Based on results going according to rankings, Bert's site has Swansea also being seeded for this round.

The thing to bear in mind with the seedings however is that had Bradford won the League Cup they would have the same rankings points as Swansea do, so there's bound to be some relatively well ranked teams who  will lose to lower ranked opponents.

For this round Swansea are pretty close from moving from the Seeded to the Unseeded half of the draw.  Worst case scenario is none of the teams ranked above us who play in previous Europa League qualifying lose and then 4 or more teams ranked higher than Swansea from the 3rd Champions League qualifying lose.
There will be 12 games of the 15 where which will feature a team ranked both above and below Swansea.  2 will feature both teams ranked below and one game with both teams ranked above Swansea (this has already been factored in by Burt as FC Salzburg are the predicted team to end up in the Europa League).

Personally I'd expect a couple of the bigger teams to lose their Champions League qualifying round but this to be offset by some of the higher ranked teams in the Europa League also losing so I'm pretty confident that Swansea would be seeded in the Play Off round (assuming they get that far).

There's still loads of if's and maybe's around what's going to happen but will be worth keeping on eye on the Europa and Champions League qualifying to see who we could end up getting.  It could range from a couple of minnows to being Hibs then Motherwell or Red Star Belgrade then Lyon.