It's only been two weeks since the Arsenal game (and five since the Capital One cup final) but both seem an age ago.  With both Swansea and Spurs coming off multiple successive defeats, the international break arguably came at a good time to provide a gap between what's gone before and the final part of the season.

As mentioned in the review of the Arsenal game, there's no shame in losing to a team of that calibre but it certainly felt like a flat performance with pretty much ever player (even Leon) guilty of some poor passing.

This season has seen a progression for Swansea in pretty much every area which can be seen in the fact that there are far more options available and the team seems less fixed to 'Plan A'.

I understand the mantra of 'Pick your best 11 and let the opposition worry about you' but I get the feeling that Laudrup takes a far more pragmatic approach and tailors the line up for each game with Swansea having 3 main strategies (albeit largely still based around 4-2-3-1 of some shape or form):
As with Arsenal's visit, Spurs are under huge pressure in the hunt for 4th and Champions League football, it'll be interesting to see if Laudrup goes for a similar tactic of keeping things tight and hoping to exploit a team looking over-committing in the later stages looking for a win.

Comparing some of the stats of the two teams, the one that struck me the most was the clear chance conversion (a clear cut chance is where the player would be expected to score), overall Swansea's in higher largely down to the hugely different figures of Adebayor and Michu:
Obviously it doesn't take a huge swing in chance conversion rate for the difference for Michu and Adebayor to disappear (3 more for Adebayor, 3 less for Michu and they'd both have 40% success rate) and some chances will be more clear cut than others but with 60% of premier league games being draws or single goal wins, little things can make a big difference.

It'd be foolish to think that we should be going out and taking teams like Arsenal apart but this game felt like a missed opportunity, Arsenal are a team under pressure and this was a must-win game for them, so it was a bit of a surprise to see Laudrup picking a midfield three of Britton, De Guzman and Ki with Michu playing as the lone striker.

This is the 'keep it tight and see what happens' option as opposed to the more adventurous options of either having Routledge or Moore starting rather than Ki.

Swansea had plenty of the ball (57% possession) but as the heat maps below show, the majority of this was in their own half:
Looking at the passing of the midfield three, De Guzman far more passes than the others but a lot of this activity was sideways passing inside the Swansea half

In the 66 minutes he played, Ki only misplaced one pass but only 14% of his passes went forward.

At times it felt that the players must be being paid by the pass as there was lots of quick one touch football which didn't really go anywhere, it's fine to have the ability to pass under pressure but it felt sometimes like passing the buck as there was relatively limited movement with the ball.

Pablo is a player who tends to divide opinion, he is a player of undoubted class and is someone who is willing to play a risky pass when others favour the safe ball.  The problem comes in games like this one where it doesn't really click and he ends up looking wasteful.

Comparing the forward passing of Pablo and Dyer in the chalkboard below, it can be seen how Pablo loses the ball far more but is also the one looking for the tricky pass:

Ben Davies was an ever willing support runner for Pablo, but there were numerous occasions where it didn't quite click.

Having Michu as the lone striker rather than the attacking midfielder means that he receives the ball about half as often, he was often gesticulating to the rest of the team to push up but with Arsenal's high pressing he was often an isolated figure:
It'll be interesting to see what changes are made both in terms of personnel and approach in their next game vs. Spurs in a couple of weeks time, it's another game against a 'big' team (who will now after losing two league games in a row will be under similar sort of pressure to Arsenal), so will Laudrup approach this one more aggressively.

The potential return of Chico v. Spurs could also help as he's more comfortable going forward than Monk which will in turn push everyone else further forward.

Passes made by Williams/Monk, tidy but rarely expansive.
Most of the above is focused on the negatives from the game, there's always the difficult balance between fully appreciating how far we've come and wanting to keep progressing.  For Arsenal, Cazorla and Oxlade-Chamberlain were impressive but the drive of Diaby was the thing that stood out most, it was only Diaby's 10th league start but you can see why Arsenal fans get frustrated with his regular 3-4 week absences.

Obviously Lamah's disallowed goal was the main talking point for the game but that has been done to death elsewhere.

Away from that, this was a fairly even game with Swansea having the best of the first half (7 attempts vs. 5) and West Brom the better of the 2nd (9 attempts vs 4).

With Moore now scoring in two league games in a row, it'll be interesting to see if he starts against Arsenal leaving Michu to play in the attacking midfielder role.

Michu's strength certainly seems to be playing behind the striker and coming on to chances and certainly is more involved in the game when playing further back.  The chalkboards below comparing the number of passes received by Michu in the West Brom game compared to the previous game against Newcastle show he received the ball almost twice as often on Saturday.
Even when playing as the main striker, Michu still occasionally drops back and has never been playing in the same kind of selfless role that Graham had last season for example (where he was usually get 10-15 touches a game) as this season's side is more fluid than that under Rodgers.

What happens in the summer may be in part determined by whether De Guzman stays, but it'll be interesting to see if Swansea really push the boat out on a striker and whether than means there could be even more to come from Michu next season as he goes back to his preferred position.
Posted by Dan B at 08:13 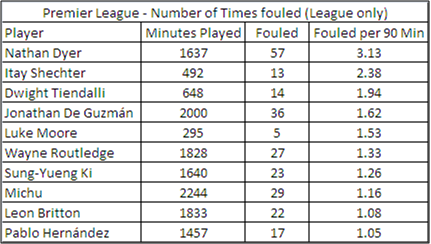