Despite Liverpool coming into this game as fairly strong favourites (not much better than evens), I got the feeling this was as much due to the 'Liverpool Football Club' brand as much as the relative merits of the two teams.

This was a match up between two relatively even teams, with Liverpool arguably having the better chances but there not being an awful lot in it.
In terms of passing, both teams attempted over 500 passes, with the overall stats pretty similar: 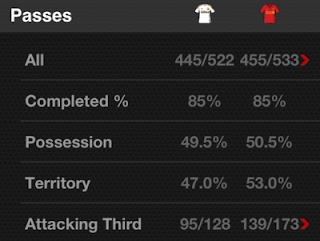 Laudrup chose to start Shechter with Ki starting on the bench, I have a feeling that this was due to having a midweek game and Ki coming back from injury, as although it might not be best for Michu I think the current best team involves Britton, Ki and De Guzman with Michu up front.
Overall Swansea put in twice as many tackles as Liverpool, with an awful lot of activity around the edge of the Swansea area:

Credit must go again to Ben Davies who made the most tackles with 7 (out of 7 attempts) and won the most aerial duels of any player:

As well as Garry Monk has played over the last couple of weeks it was good to see Chico back, as well as his defensive abilities he also has the willingness to move forward with the ball which helps create opportunities for the midfield:
When the fixtures came out, the game against West Brom was arguably seen as the 'easy' one sandwiched between the Liverpool and Arsenal games, I think it'll be a high scoring game with the odd goal in 5 settling it one way or the other.