It would be easy to point to the huge difference in attempts at goal between the two teams to argue this was two points dropped, but given the status with 20 minutes left this was a hugely important turnaround.

Reading may not look like they're going to rack up too many points this season, but a gap of five points on them rather than the two it looked like it was going to be is a huge difference.

In terms of shots, Reading scored with their first attempt at goal and 2 goals from 5 attempts in the first half.

29 of the top 30 passing combinations were between Swansea players with Ki and Britton playing a huge part in this. 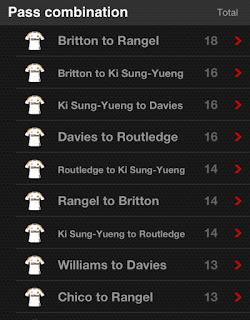 Ki was top passer overall, and as can be seen from his passing chalkboards by half his influence was further forward in the second half.

Top combination for Reading was their keeper McCarthy's long balls out to Hunt with 7 passes completed with every single one of McCarthy's passes played in to the Swansea half.