The arrival of Everton on Saturday brings one of only three teams to do the double in the league over Swansea (the others being Norwich and Man Utd), arguably Everton were the most convincing of those three and are have one of the best blends of talent and hard work in the league.

Swansea only registered two shots on target over the two games, the lowest they had against any side (next lowest was vs. Stoke with 5):

The game at Goodison was largely a case of sitting back and hoping for a draw as happened a few days earlier against Newcastle.  The game at the Liberty was more even but Everton were professional and took their chances.

Watching Everton's game against Newcastle on Monday night was a frightening experience for a Swans fan, in particular the way Everton played in the first half, regularly taking Newcastle apart, in particular down the left hand side.

Baines, Pienaar and Osman in particular were players who caught my eye with Baines involved in all 6 of the top passing combinations: 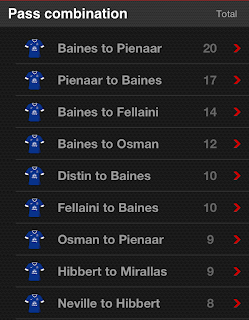 Osman was tidy but also has an eye for goal with Pienaar providing assists for both Everton's goals.

Thank god though for the second half when Newcastle were a far better outfit and caused Everton some problems or I would have been even more worried about Saturday than I am now.  Given our injury/suspension issues in defence I can see this being a really open game and I'd be more than happy with another 2-2 at home.

It's too easy to get scared by the names in the opposition but with Pablo, Michu, Dyer et al, there's plenty for Everton to be worried about too.