Most mornings before a match, regardless of the opposition, Twitter is usually full of optimists but the general feel I got for this game is that we were bricking it and felt something similar happened on the pitch with what seemed an edgy performance, especially in the first 25-30 minutes.

Overall, Everton's 31 attempts at goal was more than Swansea allowed in any game last season (the highest then being 30 attempts by Man City in the opening game last season), but Swansea also had more attempts in this game than any other game this season with their 18 attempts beating the 15 vs. Sunderland and the 13 vs. QPR.

It's interesting to see that the vast majority of Everton's attempts came from the left hand side with Baines and Fellaini creating 5 chances (and one goal) each.

When looking at Final Third Passes made this can again be seen by the volume of passing around the left hand edge of the Swansea penalty area (from Everton's point of view):

He might not be as tall as Peter Crouch but, especially given the quality of service he received it may be best to play him the same way: assume you won't win the initial challenge but make sure you're set for when he brings the ball down.  It seemed to happen numerous times that Fellaini would win the challenge and then be easily past his man. 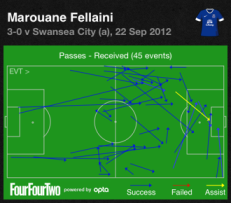 Passes received by Fellaini, a mix of short and long where pretty much everything seemed to stick.

Much in the post match grumblings was made of the ref and the 23 fouls committed by Swansea was more than any last season where the biggest was 15 conceded (at home to Stoke) with Michu committing 6 of the 23.

Some of the decisions may have felt harsh but after the first couple you have to realise the ref has set a limit for what he'll allow.  It was far from the case of Swansea being bully boys however, it often seemed like we were being out-muscled as if it was Under-21s against Under-16s.

Pablo's final ball seemed a bit wayward but at least he kept his head unlike Dyer who seemed to get the first yellow as much for dissent as the challenge itself followed by a rash challenge a few minutes later.

In terms of positives, Ben Davies had another solid game, it was also pleasing to see that he wasn't just looking to make the easy pass to the nearest player even if it didn't always come off.  Rangel looked excellent going forward and it required some incredible saves from Tim Howard to keep Swansea off the scoresheet.

7 points from 5 games isn't terrible (if you don't dwell too much on the fact it was 7 points from 3) and you can't choose when your good and bad luck happens.  As good as Everton were they had the luck of getting away with handball for the first goal but we had the benefit of playing a shambles of a team in QPR in the first week who I doubt will be as bad again all season.

Against Stoke next week, I haven't a clue what's going to happen (apart from the ball being off the pitch for most of the match) but with Chico back I can see it being a fiery one.