3 points and barring an almost impossible set of circumstances, Premier League football has been secured.  This season may have been about more than just surviving and the performances have largely reflected that but it’s an almighty relief for it to have been achieved with a few games to spare.

For a team who still have a reasonable chance of staying up, Blackburn’s approach seemed remarkably flat and lacking in ambition against a team like them who had lost 4 league games in a row.  They don’t have the defensive capabilities of recent victors at the Liberty (Everton and Newcastle) and appeared to be largely hoping for a bit of luck at a set piece.

Yakubu, Swansea’s tormentor in the fixture at Ewood park received the ball only 8 times in the 60 minutes he was on the pitch but with Samba no longer with Blackburn and Caulker playing, it was always likely to be far less of a threat than in that match.

Despite this, as with the game at Ewood Park, all of Paul Robinson's passes went in to the opposition half where Vorm's passing was generally short but even when long, usually accurate.

Prior to the weekend’s fixtures, Swansea had the most number of players (5), along with Spurs who had started 30+ league games this season and like Spurs had been accused in some quarters of running out of steam. 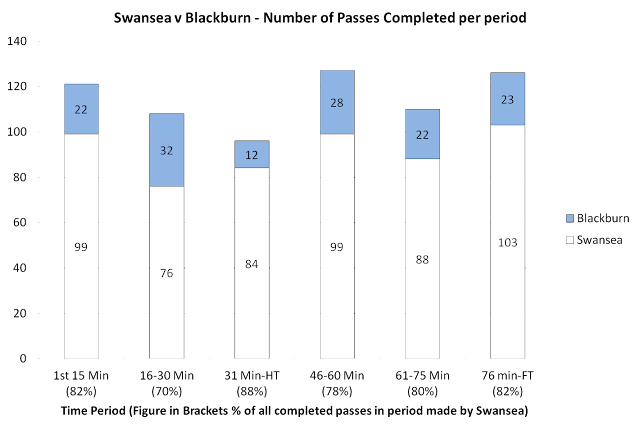 Both Dyer and Sinclair had impressive games, both making 4 successful take-ons out of 7 attempts.
Allen was once again top tackler for Swansea with 4 (2 more than any other Swans player) and Sigurdsson having the most attempts (5) although it was pleasing to see 9 different Swansea players have an attempt on goal.