A second successive clean sheet and a 11th in the league for the season was in part due to the aerial defence of Williams and Caulker, Swansea won 10 the 15 aerial duels with Williams winning 4 of his 5 and Caulker all 3 of his, with the chalkboard below showing a solid defensive aerial performance. 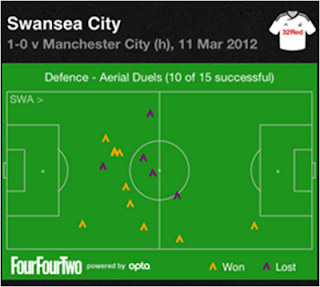 Overall this season, Swansea have won an average of 6.1 aerial duals per game (172 of 449 duels), by some distance the lowest in the league.  The low number will in part be due to fewer balls punted forward to a target man (Stoke have the highest number) but the % won could be more of an issue (38% won, compared to 48% by Wigan who have the next lowest aerial duels won with 8.2 per game).

It does appear though that this have been improving of late and will be something I’ll be looking at in the next version of the season so far stats pack (previous version updated after West Brom Away available here).

The removal of Gareth Barry in the 37th minute was a rare instance of a manager making a tactical substitution in the first half.  It might be embarrassing for Barry, but when the player coming on is of the talent of Aguero he can have few complaints.

It also has to be considered a huge compliment to the way Swansea were playing, with the stats pre and post the substitution showing both the need for the change and also the positive impact it made for Man City.
Although Man City's passing volume increased significantly, as did their accuracy, the threat was generally well dealt with and little of the activity was around the edge of the Swansea area:
As we are often told by opposing fans when Swansea lose despite bossing possession, the only stat that really matters is the score.  Luke Moore has featured in all 28 PL match day squads but has been limited to only 2 starts and a further 10 appearances as a substitute.  In that time he has played the equivalent of around 3 and a half matches (314 minutes excluding injury time) so is technically speaking averaging a goal every other game.

With Premier League status all but secured, the challenge Rodgers (and the board) face is to avoid players switching off and more importantly managing their expectations around wages or their egos around looking to be at a ‘bigger’ club.  Recent history suggests the grass is rarely greener but more often than not, money talks.

Loyalty is an overplayed sentiment in football and the sensible footballer like in any other profession will usually look to move on at the point that maximises their value.  The challenge is to persuade those who could go on to bigger things (including Rodgers) that this is best achieved by another season at least with Swansea and that the current situation is another stage in the progression and not the high water mark.