Thank God for that!

Even though it was a result that previous performances have suggested was just around the corner, the relief is tangible and proves that we can compete in this league.

At such an early stage in the season it's dangerous to overestimate the impact of the result, but with the injuries that have sprung up during and since the Arsenal game along with the FIFA issues on other potential signings and a lack of goals then a bad result against West Brom and it could have seemed that the wheels were coming off the whole season.

West Brom gave us a helping hand with a soft challenge for the penalty and Sinclair again showing a combination of technique and nerve with which he'll prove over the season that whataver happens with us this year he's a Premier League player without doubt.

Talking of Premier League standard players, Leon Britton again showed an intelligence that is a joy to watch. If there's a pass on, he'll make it, if not then he's comfortable enough to change direction or the angle to make sure that a pass can be made.  The chalkboard below shows his passing against West Brom: 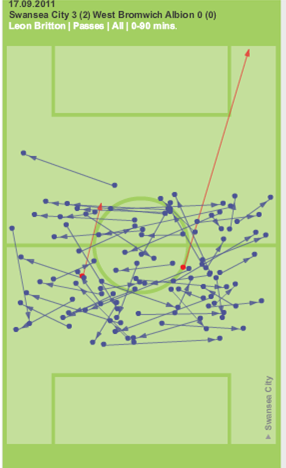 According to the Opta stats, Leon has made 250 successful passes in the 5 league games so far and only misplaced 19 passes, 8 of which were against Sunderland.

Overall, in terms of goal attempts it looks as if West Brom had plenty of efforts but most of these are limited to outside of the box. Aside from the goals, the Swans only had one other effort on target but the job was already done in the first half hour.