Much has been made of the clash of styles at the Liberty this weekend and this post aims to show graphically Stoke's likely approach.

Stoke are far from just being a 'Hoofball' side but arguably approach football more as a science than an art (which probably explains the departure of Tuncay, someone with great ability but far less consistency).

Stoke's game is heavily based on pressure, getting the ball quickly to where it can cause problems.  They've just beaten Besiktas despite only having 38% possession (the goals coming from a corner and a penalty).

They'd argue there's no point holding on to the ball just for the sake of it, it's better for it to be where it can do damage even if that means a lot of times it doesn't come off, it's worth the effort for the times it does work.

The figures below show the passing stats from both Stoke and Swansea's last 3 games:

Ultimately the comparison is fewer passes, and less of those being successful but the ones that are being in more dangerous positions, particularly down the right hand side: 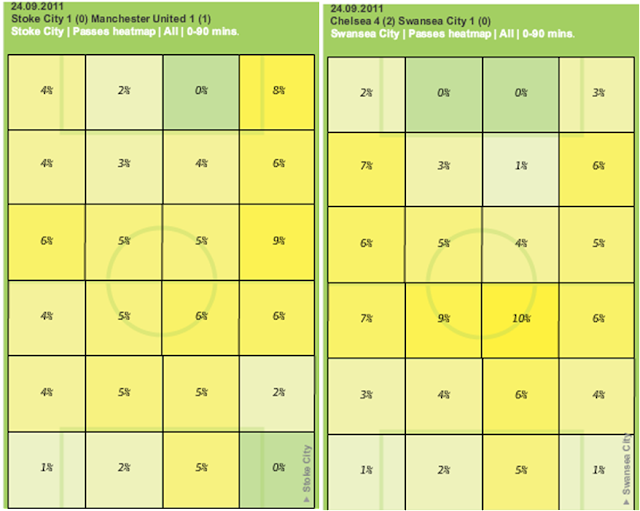 Man Utd only committed three fouls against Stoke presumably conscious of not wanting to create unnecessary pressure.  It's a bit of an unfair example just taking one game but below are a comparison of the Man Utd and Stoke goals: 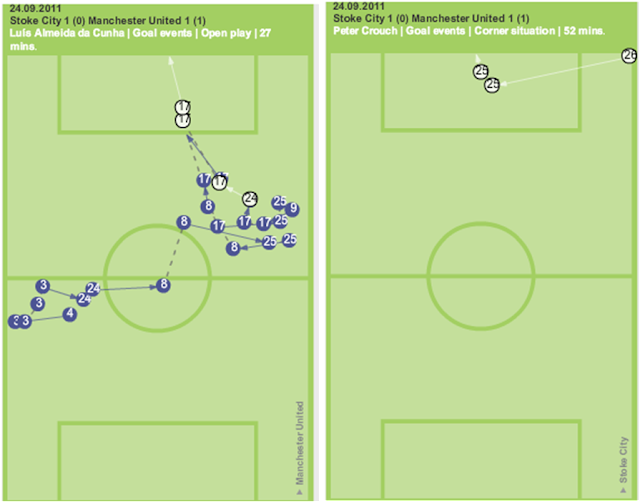 This reminds me of the guy with the sword in Raiders of the Lost Ark, there's lots of fancy moves on one side and quick and efficent finishing on the other.

Looking at throw-ins in Stoke's game against Man Utd, all bar one of their successful throws went forward (the one that went back was 3 minutes into first half injury time) and all unsuccessful throws were forward or into the box.  Compare this to the Swans against Chelsea where the majority are backwards with the focus on retaining posession rather than trying to exert immediate pressure: 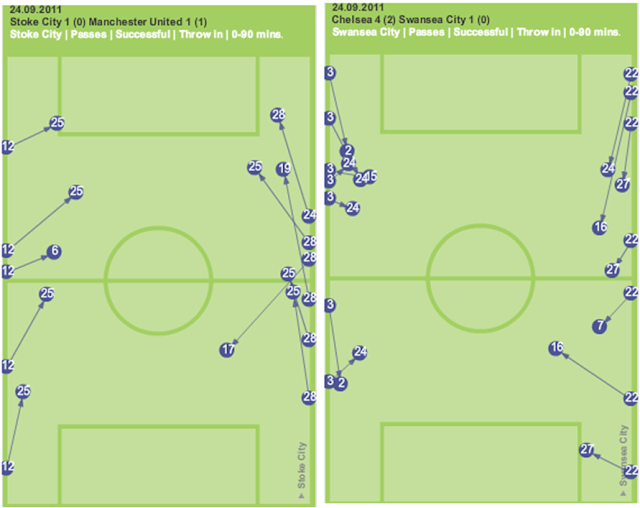 As were seen in the passing heatmaps, a lot of Stoke's activity bypasses the midfield and aerially as you'd expect an awful lot of balls get played up to Peter Crouch (number 25 in the chalkboards below).  If the balls played accurately there's little chance of winning an aerial duel as can be seen by comparing the aerial challenges won and lost by Stoke against Man Utd last week.

If you are pretty certain your striker is going to win the challenge then the support players can be bolder in going forward.  If we are missing Leon then that will be a big blow defensively as he's great at sweeping up loose balls of which there are likely to be plenty. 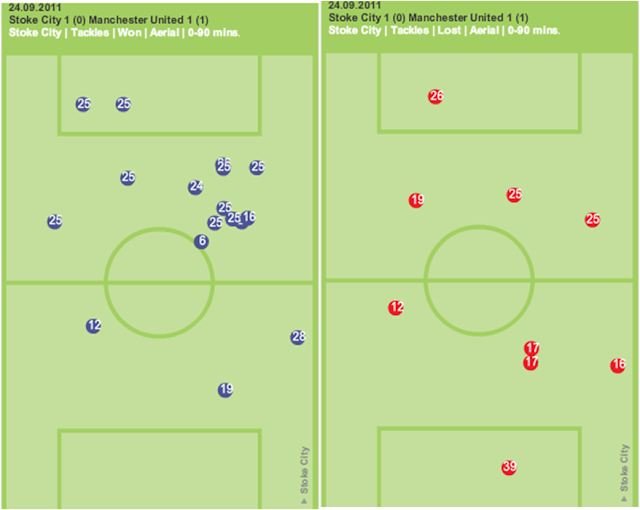 Chalkboards: Created using http://www.guardian.co.uk/chalkboards
Posted by Dan B at 02:30