There's no shame in losing to Chelsea but the sending off of Torres gave us a glimmer of an opportunity.  I get the 'Any points we get against Chelsea are a bonus' argument but even though the sending off made it more of an even contest, chances created were still relatively rare.

I'll start with the negatives first then move on to the more positive areas, naturally after a defeat the focus tends to be more on what went wrong.

As mentioned in previous blogs, these are the stats for where a player attempts to dribble past a member of the opposing team, according to the Opta stats on the Guardian Chalkboards this only happened once for the Swans during the game, and that was in our own half.  This compares with 10 from Chelsea: 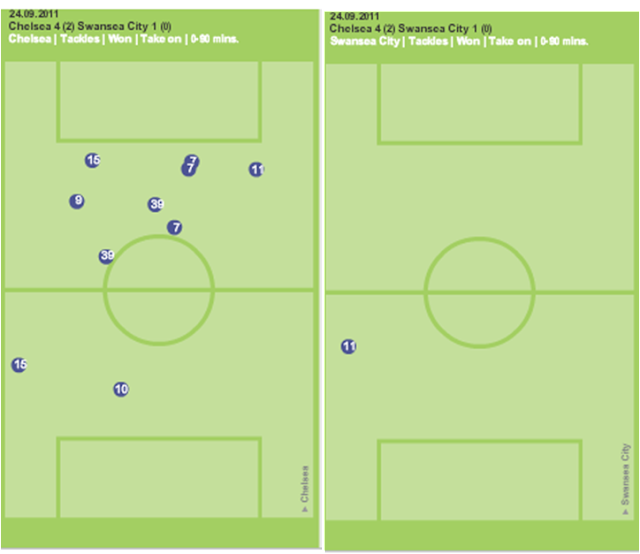 Of the 7 attempts on goal, 3 (including the goal) came from Ash, with neither Lita or Graham having an attempt. 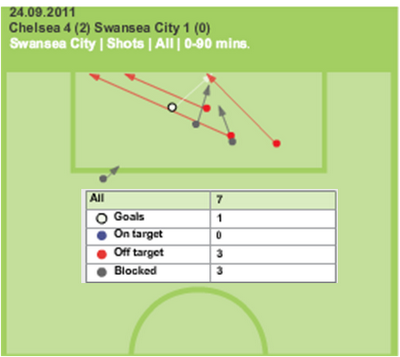 It might not seem the biggest issue in the world but 9 out of 21 goal kicks from Vorm were unsuccessful (compared to 2 in 10 for Cech).

This is something I'll be looking at in more detail in the Stoke preview but Vorm's kicking from dead balls has been of variable quality over the season so far. 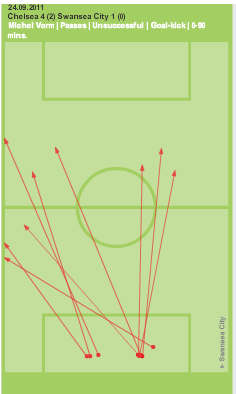 It can be argued that any goal is preventable but some are more preventable than others, Chelsea's second moves quickly from Chelsea's defence to wide open gaps in the Swans defence, although praise must go to Torres and Cole for their interplay that leads to the goal. 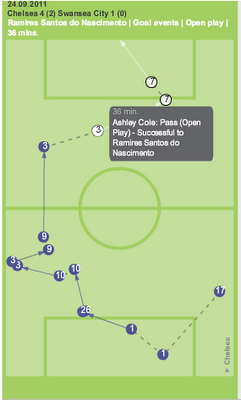 Joe Allen continues to show that he's at home at this level and the crossfield pass to Dyer who then put in Rangel was an absolute delight.

As said after the Man City game, these kind of teams have players at the very top of their profession.  In the Premier League there are 3 teams (Man U, Man City and Chelsea) where especially away you're just along for the ride and hoping for the best.

There are another 3 (Liverpool, Spurs and Arsenal) where you'll probably be up against it but catch them on a bad day and you're in with a real chance.

Beyond those there's not an enormous gap, with the main difference being the depth of squads, so luck around minimising injuries to key players combined with activity in the January transfer window will be key.

Stoke home and Norwich away offer a great opportunity but undoubtedly they themselves will be thinking exactly the same thing.

Games such as Saturday are the whole point of being in this division, even if the result wasn't great, having the opportunity to have a crack at them is what we're here for.

Chalkboards: Created using http://www.guardian.co.uk/chalkboards
Posted by Dan B at 16:24