For some, the glass is always half full and 'In Huw we trust', for others we're on the fast track to oblivion as the yanks slowly screw us.

As always the reality is somewhere in between, but for me there's no doubt that the amount of spin 'keep the faith' messaging has increased over recent months, although I would agree with Lee Trundle's view that being overly negative can end up impacting the team a hammering v Chelsea next time out and things could get toxic, even if that's being unfair.

In this piece (and subsequent parts) I'll look at the various areas of concern and try and take an objective view, for me neither blind faith or blind panic will get you far.

The New Owners
The biggest problem the new owners have is that while at face value they are saying the right things, these things are also the kind of soundbites that you'd trot out to keep the plebs happy the way a rock band might say this was the best night of the tour.

"We were driving down the M4 and thought they knew how to support a team in Cardiff, but no-one rocks like Swansea!" 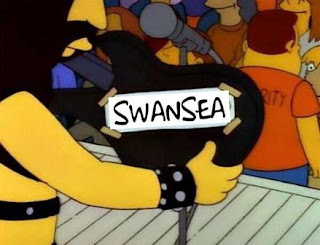 For what it's worth I don't think their asset strippers (although they are obviously here to make a profit). A bit like with privatisation, the aim is to exploit inefficiencies and both be more profitable and provide a better service (in the Swans case I guess that'd be consistently 8th-13th with maybe the odd cup run).

If we assume club was valued at £100m, then the controlling stake would have cost £68m.  I've no idea what kind of return an investor would expect given the potential risks but I can't imagine it'd be less than 5% so you'd want to make £4-5m a year on average either through regular payments or by selling the club on in perhaps 3 years time when the next TV deal comes in.

The term investors has been used for Kaplan/Levien and is both correct and misleading. If I invest in a property, I'm an investor, but you as my tenant may see no difference now that I'm your landlord. Other than putting enough in (if required) to keep the Swans in the Premier League I don't see them putting in their own money just to move the club up a place or two in the league.

There will be some that will say 'Look at Leicester' but by that argument you could say 'Look at Blackburn/Villa/Charlton' or, God forbid, Blackpool.

In their interview with the BBC they talk about being 'faster, smarter, craftier' and while from the outside a lot of clubs look like their being run by monkeys with dartboards, most will be using data in one form or another.

One possible ray of light in this area is that analytics firm 21st Club were involved in the due diligence when buying the club and are a smart set of people (see press release). Although I have no idea how involved they are in our transfer business, this from one of their analysts at the start of last season about Eder made me smile in retrospect given his season (even if he did end up scoring the winner in Euro 2016).

The new owners talk about the club no longer being 'a stepping stone', but that to me sounds like a load of nonsense, if Borja for example has a good season then he'll be off somewhere else for £25-30m next season.

There are a few ways to avoid being a 'stepping stone':
Bony/Ayew are good examples of players using the Swans as a stepping stone, I don't see being talented, driven and ambitious as a negative.  If you want a player to have a major impact on the team, it's inevitable that those higher up will show an interest, you can't have a team full of 'unsung heroes'.

I'm delighted that Gylfi has stayed, but I'd imagine his contract has more Clauses than a reunion at a Father Christmas training school.

Landon Donovan's role is a bit of a strange one, this quote from that linked interview with him doesn't fill me with the greatest of confidence:

“The new owners met with me a few months back and said this is likely going to happen and admitted that they didn’t know a lot about football and said ‘we know that you know the game and you’re passionate about it, you played at Everton, spent time in world football and sort of understand it a little better, would you be willing to help us, advise us and consult with us on certain things?’ I said yeah, that would be great and that’s something I am certainly open to."

The above sounds a bit like an attempt to get the face of a 'Friendly American' out there to try and placate people rather than a real in-depth involvement (at least for now, especially since first writing this he has now signed up for LA Galaxy).  As I said earlier, sensible ideas and cynical plans look very similar so time will tell, with regards to analytics, Wales Online yesterday reported a revamp of recruitment methods including a more analytical approach.

Subsequent parts (whenever I get round to it) will look at the old board, the team, the transfer window, finances and where we go from here.
Posted by Dan B at 05:46