Only a couple of hours now to the start of the new season, it was interesting to see comments by Huw Jenkins at certain points last season that he felt there was a bit of a defeatist attitude (see below from Guardian article in Nov 2013):

It is a theme that Jenkins returns to time and again without being able to put his finger on the reasons for the change in mindset. "I don't know [why it has happened]. But I've sensed it this season more than ever. We generally tend to talk about things, for me, in the wrong way. We don't see every game as a winnable game, which is not right and it's not our mentality."

Whenever I heard Laudrup speak, I thought he pretty much always talked perfect sense, the problem is whether you want a manager to have the attitude along the lines of "This side are better than us, lets keep it tight, get to 60 minutes and see what happens".

This attitude meant other than the first day 4-1 defeat to Man Utd, no side gave us a pasting last season even though as can be seen in the chart below, we only got 2 points from 16 games against the top 8.
With Man Utd still in a state of transition, in terms of today's starting 11 it arguably be weaker than that which finished last season, this is a huge opportunity to get some real momentum into the season.  I'm not wanting to run down the Laudrup tenure, but in part (league wise) it was 7 points from the first 3 games followed by average performance thereafter.

I think he'll start on the bench today but I do like the look of Gomis, here's his shot chart from last season with 14 goals (1pen) from 86 shots.  If Bony can get into double figures again and Gomis and Sigurdsson both get close to that too then we'll have a strike force to be feared. 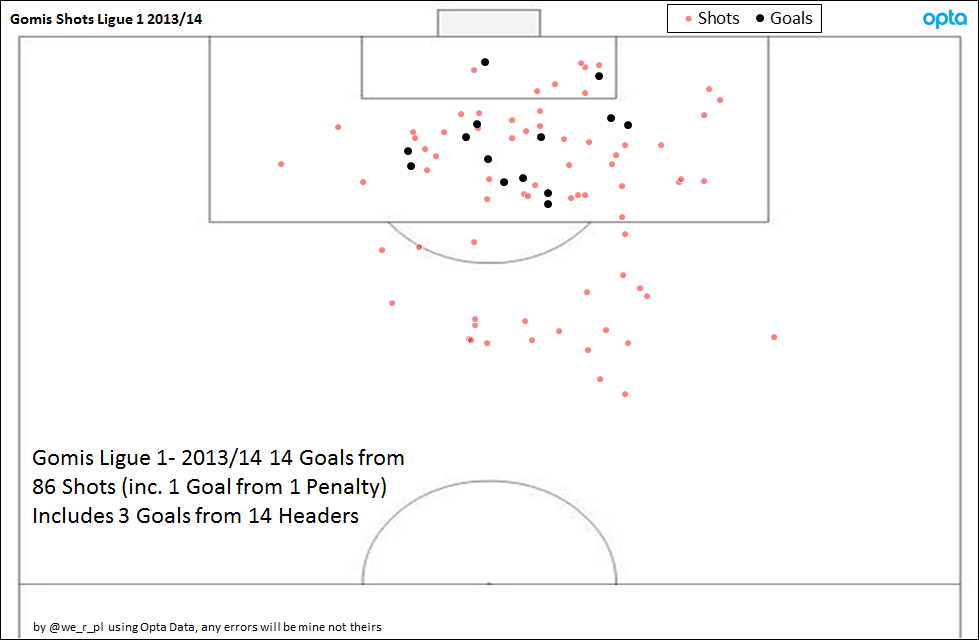