They say not playing well but still winning is the sign of champions, that's obviously stretching things here and ultimately the second half was more about Burnley's missed chances than snuffing out Burnley's threat (Monk in an interview saying he was pleased that Burnley were restricted to only 1 attempt was true but felt more of a case of putting a positive spin on things).

This was certainly a proverbial 'game of two halves' with Swansea looking to protect their first half lead after Dyer's well taken goal and with a mixture of luck, bad finishing and some good goalkeeping from Fabianski ended up with the 3 points.
In situations where a team is protecting a 1 goal lead it's always difficult to determine how much of the pressure from the losing team is due to them forcing themselves on the game and how much is the team in teh lead taking a more defensive approach.

In terms of pass volumes, Swansea's falls off a cliff from around the 70th minute after a period of domination of the ball either side of half time.
A good example of the change is looking at Ash's passing by half.  This was 100% in the 1st half (44/44) and 73% in the 2nd half (16/22):
A similar thing can be seen from Fabianski's distribution:
Days like this one need to be remembered when we play well but things don't go our way, on another day, the 1st half pressure could have yielded a second goal (an ultimately a 3+ goal win), but also better Burnley finishing could have seen the points shared.

Update: Another way of looking at the level of pass control would be to look at % possession not just total volume which gives the chart below:
The 5 minute possession chart is a bit more up and down than the 10 minute version but more accurately reflects swings during a match. 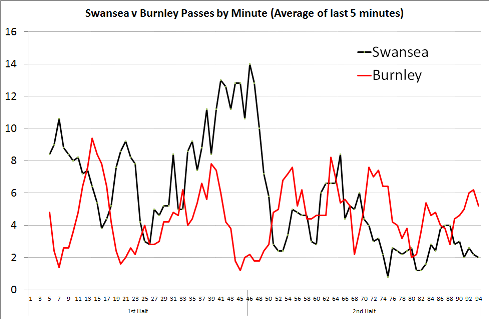