After the roller-coaster of Monday against Liverpool and the incredibly impressive performance against Valencia comes a potential banana skin against Palace.  This is one of those games where both teams will have strong hopes of winning, Palace hoping that 3 games in 6 days will take its toll on Swansea and the Swans feeling if they play to their full ability they would hope to win.

The performance against Valencia was obviously helped by the early sending off, but even still it was a match where Swansea dominated with Valencia not having a single shot for a 60 minute period between the 6th and 66th minute and only a late flurry of attempts giving Valencia a small amount of respectability on the shot count.
Looking at the shot activity for Palace's last 3 games, it can be seen that the game against Man Utd is the only one where they particularly outshot and that was due to the penalty and red card right at the end of the first half, up until that point it was a relatively tight game. 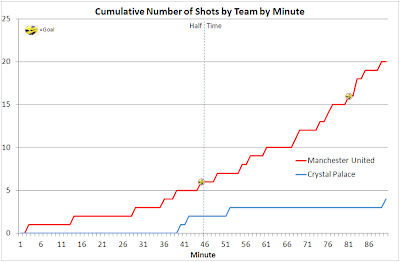 For details of shot activity by minute for both teams over the last 3 matches, I've put a document together here with a bit more detail which shows shots over time as well as chalkboards of all attempts to give an idea of total activity and also shot location which is a rough indicator of chance quality (there's little value in having had 10 attempts if there all from 35 yards).

Confidence is a fragile thing and it only takes one result to give it a knock, much was made though earlier in the season about us arguably being able to put out two good quality full matchday 11s as shown in the piece by 'The Swansea Way'.  Given the improved strength of our squad and this is the kind of game in the middle of a busy period where that will be tested.

Pozuelo looks a huge talent although I expect him to have the role of impact sub this season more than being a regular starter, I think it might be Britton, Shelvey and De Guzman in midfield with Michu up front who seems to never tire and Bony on the bench given he's taken a couple of knocks over the last couple of games.