The fact that there's any sort of debate about who will start in goal against Malmo is testament to how well Gerhard Tremmel played when called on last season, both in the league and also as part of the League Cup winning side.

All through Swansea's first season in the Premier League, from the bombardment that came in the opening match against Man City where Vorm's acrobatics kept the score respectable through a series of great performances and clean sheets, Vorm was undoubtedly the player of the 2011/12 season for Swansea.

It got to the stage where he was maybe playing too well and might get picked off by a big club leaving us with the relatively unknown (at the time) Tremmel who had let in 2 goals from 2 shots in his only league appearance that season although Gerhard did of course have plenty of experience from 'The Continent' so would hopefully be a safe pair of hands both literally and figuratively.

Injuries to Vorm last season meant that Tremmel started 12 League games and came on as a sub in another two, with the run starting due to Vorm's groin injury stretching to reach Tevez's goal at the Etihad meaning Tremmel started 8 league games in a row during Nov/Dec 2012.

In terms of stats comparing the performance of the two in the league, I've compared them using the relative chance types they've faced (more details on that here, but the main thing to note is that the chance types are mutually exclusive so Penalties are not included within Clear Cut Chances which are not included in Inside Box Shots) but excluded the two games where they've both played as won't have the full chance breakdown for each player in those games. 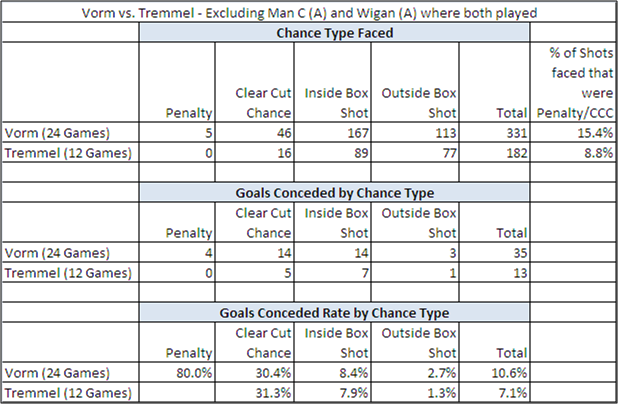 If you just looked at the figures in the bottom right, you'd see that Vorm conceded a goal from 10.6% of shots faced where Tremmel only conceded on from 7.1% of shots faced.  This however ignores the fact that comparatively speaking Vorm had a much tougher time of things with the chances he faced being much better quality.

When looking by chance type faced the stats for the two of them are pretty similar, Vorm saved 4 of the 5 penalties he faced which is pretty much par for the course for penalties faced in the Premier League last season.

In terms of errors leading to shots/goals, Vorm made 7 errors, 5 of which led to goals and Tremmel made 2 errors, 1 of which resulted in a goal which is slightly in Tremmel's favour but not a huge difference.

In this analysis I've looked at all attempts faced, you could argue about excluding shots blocked by defenders as the keeper has no role in them and I'd agree but that split isn't possible on data publicly available with regards to clear cut chances, inside and outside box attempts.

I would however argue that just because a shot isn't on target the keeper hasn't done his work.  Closing down the attacker quickly or good positioning are things that could result in a striker missing the target but could be down to the goalkeeper's ability as much as any failing from the attacker.

Vorm for me is still the number 1 keeper, but we have the situation now where Tremmel's name being announced on the team sheet will be met with an "OK" rather than a "Oh Shit".

With regards to the Malmo game, Laudrup has said that there isn't a First XI as such this season, with possibly 55+ games to play there's going to be a fair bit of rotation (there is of course the risk that we're out of Europe before the domestic season starts and have an abundance of midfielders and not enough games to play them in).

I'm going to stick my neck out and think that Laudrup will start with Bony on the bench, partly as he's new and partly do be a bit more defensive minded given that Malmo are likely to be more prepared as they are already half way through their season and Laudrup has stressed the importance of not conceding.

I think the midfield three will be Canas, Britton and Shelvey with plenty of options on the bench according to how the game pans out.

Note: After almost finishing this piece I realised that freekicks faced were not included in the analysis.  I have factored in the free kick conceded by Tremmel v. Norwich but not included freekicks saved by either keeper.
Posted by Dan B at 01:16