This might not have been the most high-octane of games and in the first half especially almost resembled a training match given the slick one-touch passing from Swansea.

Sunderland offered very little all game with only the occasional threat from set pieces, Sunderland failed to hit the target all game although Tremmel made a couple of good claims and clearances.
Swansea's best chances came (as they have quite often in recent games) from Sunderland mistakes at the back resulting in space for Swansea to attack.

Sunderland put slightly more emphasis on attack in the second half, as can be seen by the attempted dribbles by Sessegnon who had 2 in the 1st half but 8 in the 2nd:
Other stats of note were De Guzman playing 100 passes (94% completion), the impressive thing about De Guzman is he can play anywhere along the middle from being the attacking midfielder to being the player collecting the ball from the defence.

I also thought Dyer had a decent game, thought he made a lot of passes stick and kept possession well and as is often the case was the most fouled player yesterday:

It has to be seen as a compliment that Sunderland were more than happy to settle for a point and adopted a safety-first approach.  It'll be interesting to see if West Ham have the same approach are a more attack minded.  It'll be the first game post the transfer window closing so still to be seen whether the likes of Graham and Diame will still be around.

After a pretty reserved first half where Swansea had 10 attempts but didn't hit the target and Stoke had only 3 efforts (1 on target), Swansea turned on the style and ran out comfortable winners to maintain confidence going in to the huge game against Chelsea on Wednesday.

Having scored a free kick from a similar area in pre-season (although placed the other side), it was great to see De Guzman put an absolute beauty away today.

Man of the Match though for me was Ben Davies, as well as his goal he had the most Tackles, Interceptions, and Take-ons of any player in the match.
As has been the case for the last couple of league games (Villa and Everton), Swansea lost the majority of Aerial Duels, winning 13 out of 45 (29%).  In this match Peter Crouch won 15 out of 17 Aerial Duels (with Ki winning 0 out of 8) but few of these were in dangerous positions.  As previously seen in games against Stoke, it's often best to let Crouch win the duel and concentrate on positioning than expending too much effort trying to win a challenge and ending up unable to defend.
Prior to this game Swansea had won 85% of their throw-ins compared to 64% from Stoke which shows how much attacking emphasis Stoke place on them.  Comparing throws from today and the game earlier in the season at the Britannia shows a lack of penetration from Throw-ins compared to earlier in the season.
Much was made of both Danny Graham and Kenwyne Jones being transfer targets (I've compared their stats in a previous post which suggests Graham brings more goals, but Jones more in the air).  Personally if he wants to stay I'd rather stick with the known and keep Graham, although it seems pretty obvious that he wants out.  That said if he's still here come February I think he'll still be putting the effort in and attitudes can always change.

With all the rumours going round about bids coming in for Danny Graham and possible rejected bids for Kenwyne Jones, I've decided to have a look at their comparative stats.

I've looked at Premier League games since the start of last season to hopefully give a long enough window for a fair comparison.

When looking at some of the top level stats, Graham comes out on top in all bar one of the metrics: 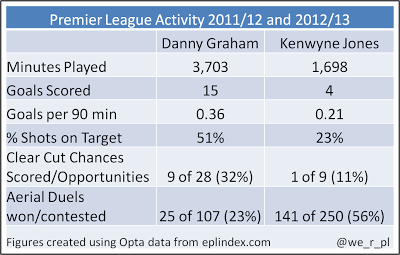 When comparing across teams, it's always worth bearing in mind the relative styles of the teams (e.g., Stoke generally don't score many and have a lot more aerial duels) but the figures suggest Graham scoring at a rate of around 1 in 3 full games and Jones around 1 in 5.

For shots on target, Graham's figure is far higher (51% v 23%) and almost half (23/47) of Kenwyne Jones' shots end up off target so it's not just a case of lots of goalmouth scrambles with shots getting blocked.

For Clear Cut Chances (e.g., where a player is through on goal has a 'reasonable' expectation of scoring), Graham is far ahead but is a long way behind Michu's figures of 9 goals from 15 clear cut chances in the league this season.  Some chances are more clear cut than others of course, a tap in is easier than a one-on-one as well as taking the 'You've got to be there to score them' argument into consideration.

The most obvious thing in Kenwyne Jones' favour is the huge difference in Aerial Duels won (56% compared with 23% for Graham), this is made an even bigger factor when you consider that Michu has had 140 aerial duels in the league this season (winning 49%) already far more than any player had across the whole of last season (Ashley Williams with 107).

The first thing you naturally look for in a striker is goals, but with a more direct approach this season, having a player who can hold the ball up and battle in the air could be an interesting addition, whatever the reasons for a possible change in striker.

To be fair to Jones, just looking at this season's stats, he has 3 league goals in 723 minutes compared to Graham with 3 in 858 so it's not a completely cut and dried case and he went to Stoke for £8m so there must be something there.

Stats taken from data supplied by www.eplindex.com
Posted by Dan B at 04:25

After the incredible result against Chelsea in the cup, it was back to the bread and butter of the league against Everton who have pretty much bullied us since our return to the top flight.

This game actually saw Everton have more attempts compared to the game at Goodison last season (18 compared to 15) and Swansea having even fewer efforts (4 today compared with 5 last season).  The margins between a hard-fought well earned point and anti-climactic defeats where you've offered little in attack is pretty small.
After a shaky start to the season where Ash had a couple of bad back-passes that lead to goals and Chico's infamous attempt to slice Saha's ear off, Chico and Ash are now forming a formidable partnership with Chico doing the majority of the tackling and Ash blocking shots.
Before the match I was hoping that Tiendalli and Rangel would both play down the right to combat Baines/Pienaar down Everton's left where so much of their play comes from, but I'd be lying though if I predicted Dyer as front man.  I was expecting Pablo to be rested and maybe Dyer on the left to give Routledge a rest.  Personally I wouldn't consider not playing Graham to be a snub, I'd expect him to start against Arsenal in the FA cup replay in midweek.

Most of Everton's attacking still came down their left with Baines (7) and Pienaar (4) creating 11 of Everton's 16 chances, as can be seen by the tackling comparisons it was a major area of activity:
When looking at where interceptions took place, even though its 20 for both teams, it can be seen where Swansea have set up just outside the penalty area to frustrate Everton:
As was the case with the previous league game (against Villa), Swansea were dominated in the air winning under 30% of Aerial Duels:
Everton are one team in particular who have given us little time to pass the ball around at the back, often forcing Vorm to kick long with the figures from the game today looking particularly bad:
Another game undefeated and now up to 30 points with Stoke/Sunderland/West Ham/QPR to come in the next four league games, although cup commitments mean a delicate balancing act.  I'm hoping for heavy snow to come in midweek so the Arsenal game gets moved until after the 2nd leg of the league cup

Given the first half hour yesterday and Villa's recent form, it's easy to see this as a huge opportunity wasted but equally if you get an injury time equaliser you can't be too downcast as much for the two points taken away from Villa as the point gained.

I certainly agree with the Gary Player maxim 'The more I practise, the luckier I get', but where we benefited from some dodgy goalkeeping against Fulham, the second goal against Villa just wouldn't come, other days you get results like the opening day win v QPR where everything seems to go in.

The top level goal attempt stats are almost an exact reversal of the Fulham match with one side having far more attempts than the other but actual attempts on target being pretty similar:
Looking over the stats for the game the one that struck me most was that of Aerial Duels, with Swansea winning just 14 out of 55, they key contributor to this for Villa were Benteke up front and Ciaran Clark in defence:
The aerial battle was even more one-sided in the second half than the first with Swansea winning just 4 of 22 duels in the second half:
One thing to always bear in mind with Aerial Duels is that there will be cases where you may not want to win the header (e.g., where you know a strikers flick on will go straight through to the keeper).  Also if a ball is played in 'correctly' (i.e., relatively flat) it's not a fair contest and the striker is more likely to win the duel.

Having said all that, when looking at the outcomes of goalkeeper passing you can see a huge difference in the Blue/Red split (Success/Fail) between the teams:
Remaining unbeaten over the 4 games around the Christmas period is nothing to be sniffed at and as players such as Pablo continue to acclimatise the second half of the season could continue to provide great entertainment.