A strange match that had pretty much everything and ultimately was a point well earned. What could have ended up as a win after Michu's equaliser could also have been worse after Chico's sending off.  How much contact there was with Louis Saha's ear is debatable but was undoubtedly reckless.

Sunderland are the kind of side that provide a good barometer of where Swansea are at the moment, they're one of a number of sides that are likely to finish around 9th-15th, unlikely to trouble the Europa League places but also unlikely to be in any danger of going down.

Sunderland were a different proposition to QPR and West Ham not least because they didn't concede an early goal, they set up quite defensively looking to pack the middle and hoping to get something on the break or from a set piece.

Sunderland put in a hard-working performance not least in their tackling around the box:

Tackles by Team: Sunderland letting little through around the edge of the box

In terms of trying to go past players that was largely non-existent from Sunderland, attempting only 4 take-ons compared to Swansea's 26

Crossing, especially in the first half for Swansea was pretty disappointing finding a team mate only once out of 16 attempts.  The second half showed a marked improvement with 6 of 17 successful including the goal as  well as another good chance for Michu.

Crossing by Half for Swansea

It's a credit to the play of Ben Davies that in terms of the match itself, Neil Taylor's injury had relatively little impact with Davies putting in an assured performance. 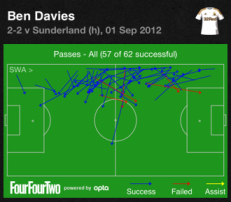 Passing from Ben Davies.  In the time after Chico's sending off, Davies' passing was even more accurate with 23 successful passes from 24 attempts

As well as Davies' passing, Swansea as a whole looked composed after the sending off with Sunderland only creating a single attempt in goal whilst having a man advantage compared to 3 attempts by Swansea.

Passing after Chico's sending off: majority of play going down Swansea's left with Sunderland seemingly happy to settle for a point.

It was only 15 minutes or so but Ki Sung-Yueng showed he was capable of slotting in to the Swansea side with relative ease and looked composed on his debut. 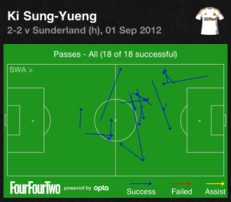 Going behind twice and playing with 10 men for 20 minutes means that this feels for me like a point gained to me.  The positives were 90 minutes for De Guzman (even if that was partly due to the need for subs because of Taylor's injury and the sending off) as well as excellent performances again from Dyer and Routledge and another goal from Michu.