With the style of play undertaken over the last few years along with the almost unheard of level of fan ownership within the club, it's been incredibly difficult not to come across as smug if you're a Swans fan, with that being taken to new heights after the first two games this season.

The level-headed view would be that its only been two games and those have been against a ramshackle QPR and a newly promoted West Ham, but the attacking intent shows a level of threat that is likely to cause most teams problems.

As against QPR, there was definitely a level of Swansea riding their luck with West Ham creating a number of chances and goalmouth scrambles.  The chalkboard below of aerial duels in each half show the level of pressure in the first half compared to far less activity in the box and more challenges won in the second.
After an impressive debut last week, Chico appeared to make a nervy start to this game misplacing a number of passes early on but settled down in the second half.

The second Swansea goal was due to James Collins' error (and Michu's closing down) but the first and third were the result of excellent passing as the chalkboards below show with plenty of passing in the build up to both.
With regards to Collins, as well as the mistake for the second goal, most of his clearances failed to find a team-mate unlike those for Rangel for example.
As mentioned in the review of the QPR game, there is often a more direct approach with Swansea with the wide players often playing more centrally.  An example of this can be seen when comparing the passing from Rangel to Dyer in the West Ham game compared to the last home game at the end of last season against Liverpool.
Despite this more direct approach, there were still plenty of examples where Swansea were able to keep the ball with the calmness and authority that was present last season (9 of the top 10 passers were Swans players) with the period between the 71st and 73rd minute a great example of the level of control Swansea were able to have.
As Laudrup repeatedly says, enjoy it while it lasts although Saturday against Sunderland offers the chance to go back to the top of the league.  For now, every point gained is one closer to safety but whatever the final position it's guaranteed to be entertaining. 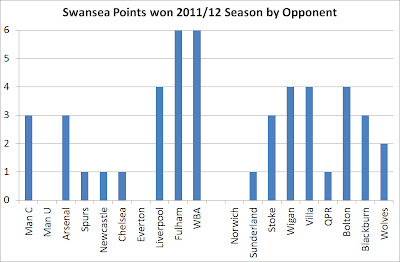 Days like the one on Saturday are the kind that stay long in the memory and as Laudrup himself said "...there will be worse days, but nobody can take away what we have achieved".

Last season's confident performances coupled with a more direct approach from Laudrup promises much, but before the game the unknowns of a new manager and a number of new players in key positions meant that there was as plenty of nerves before the game kicked off (for me at least).

After Swansea's early goal thanks to Rob Green's poor attempt at saving a Michu shot, QPR had the majority of play until around the half hour mark, with plenty of possession around 25 yards out but attempts largely restricted to speculative shots.  That said if Hoilett's effort with Vorm in no man's land had gone in it may have been a different game.  In Vorm's defence one reaction save he made from a Mackie effort was incredible.

After the half hour mark, Swansea had a couple of chances from set pieces which could be another change from last season.  Last season's centre backs, Williams and Caulker only scored once between them in the Premier League last season, this year I'd expect Williams and Chico to get 5+ between them with Chico especially looking threatening in the opposition box.

QPR had 10 attempts at goal in the first half, all of them in the first 30 minutes.  Swansea had 7 attempts by half time, 6 of these coming after the half hour mark.


Swansea's more direct approach this season can be seen in a couple of examples of where players received passes.  The chalkboard below compares where Rangel received passes on Saturday compared to the corresponding fixture in April when chants of 'Boring, Boring, Swansea' rang out from the QPR fans as Swansea played keep ball in attempt to frustrate the opposition (which worked perfectly until conceding just before half time).

There's still the ability to retain possession when required with Chico for example fitting in to the team well and looking extremely comfortable on the ball.  The departure of Allen and arrival of De Guzman signals a slight shift in approach from retention at all costs to a greater willingness to play the ball forward.

As well as the change in midfield, the approach of the two wide men was also noticeably different compared to last season:
One game doesn't make a season, but initial signs are incredibly positive: De Guzman, Chico and Michu all impressed on their league debuts (with Agustien also looking sharp when coming on for De Guzman)

Joe Allen was one of Swansea's best players last season and undoubtedly Swansea's most valuable asset in terms of saleable value, but with the wonderful Leon Britton available, the negatives around Allen's departure can be minimised.

Having both Allen and Britton in the same side was possibly too defensive at times (it's great when the scores are still level but was maybe found wanting when trying to chase a game) but what Allen's departure does mean is that Britton becomes even more key to the side and any Swans fan should pray on a daily basis that nothing untoward happens to him.