Where it went wrong against Wolves

Where did it all go wrong?  Well the short answer would be that for the second goal (and the corner leading up to the first) that our positioning was all over the place as you could also argue it was the first goal (the picture shows the space both the scorer Doyle has and also Henry on the edge of the box).

The lead up to the goal has the almost comedic image﻿ of a load of Swans players rushing to get back after spending too much time watching the ball and was played for the country to see on Match of The Day. 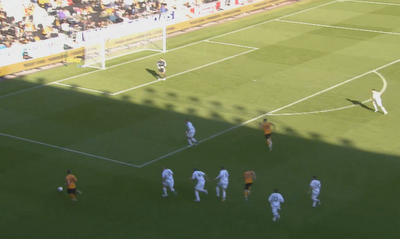 All of this wouldn't be anywhere near as annoying if we hadn't been so good for the first 70-75 minutes, so the question is where did it go wrong?
I've looked at the 10 minute intervals between the hour mark and the end of the game and it can be seen that it is a lack of composure and the attempt to retreat to safety that cost us.  In the chalkboards below the lines relate to Successful (Blue) and Red (Unsuccessful) passes.
﻿ ﻿

It's a stat I've mentioned before, but it's probably something I'll keep saying throughout the season: Wigan stayed up last season with only 9 wins.  I think everyone was fully aware of how much the win would have meant and instead of doing what they're good at and controlling games nerves kicked in and people dropped deeper and passes went astray.
The overall pass completion rate was 81% for the first 75 minutes when Britton was on the pitch but only 64% after he went off.  I think he brings a level of calm that was perhaps missing at the end of that game.  His replacement (Orlandi) had an 80% completion rate but that was only on 5 passes, it's more Britton's absence removes the obvious 'out' ball as you know a pass to him is likely to stick.
If we play like we did in the first 70 minutes on a regular basis then I don't think there's any doubt that there are at least 3 teams worse than us, if you looked at the last 10 here and the first 10 at Norwich however you wouldn't be as optimistic.
Ultimately I think we'll get somewhere between 38-48 points this season and it's going to be a question of holding our nerve, keeping people fit and a little bit of luck.
Posted by Dan B at 06:51