Another strong performance, another clean sheet and we go into the International break in the top half of the table.

Things are deifinitely going well but just like there was no need to get too downbeat about the Chelsea defeat, we shouldn't get too carried away after the Stoke win.  For the second home game running a daft challenge has given us a penalty in the first 15 minutes (and a goal thanks to Sinclair's composure and technique), pumping the crowd up and relaxing the players.

Stoke played a pressing game with the aim of disrupting our normal passing routine which is evident in the fact that Swansea only made 490 passes compared with 551 against Chelsea and 606 against West Brom, with the success rate being 77% compared with 84% in the previous two games.

When comparing Vorm's passing in the West Brom and Stoke games there is a huge difference, against West Brom a large proportion of his passes were short ones to Williams but against Stoke nearly all clearances went up into the Stoke half. 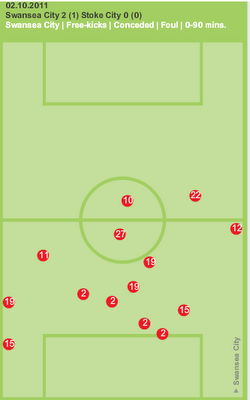 ﻿As good as the performance was, I do think we were the beneficiaries of some poor set piece play from Stoke.
Looking at the areas fouls were conceded against Stoke, they had quite a number of opportunities to create chances but largely fell short along with us being lucky when Whelan's free kick hit the post.


Joe Allen again showed how lucky we were that he signed a new contract at the start of the season rather than trying to drag it out until later in the year when he would undoubtedly been able to demand more.  Both him and Dyer seem to place being in a team (and a city) that appreciates them and where they get real job satisfaction above chasing every last penny. 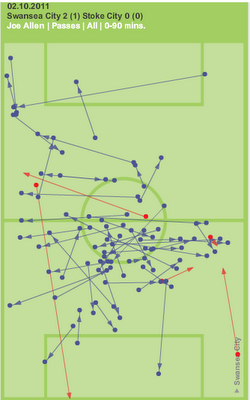 Joe's passing was largely around the centre circle, tidy and efficient with the ability to spot the longer ball when available.

As nice as it is to visit places such as the Emirates, I'm more excited about our trip to Norwich in a couple of weeks where it'll be a game which means a lot to both sets of fans with the opportunity to put some space between us and the bottom three.

Chalkboards: Created using http://www.guardian.co.uk/chalkboards
Posted by Dan B at 03:51